I’ve been hanging out on the Weight Watchers forums a lot lately to get useful tips, recipes motivation, inspiration, and just plain trying to feel “part of something”, to help keep me focused. One thing I turned to the WW forums for was to find some healthy snacks. I don’t really have junk food in the house, and last week I was severely lacking in healthy snacks. I’ve also been dropping starches and carbs, and this has left me way hungrier (and thus grouchier).

Every day people post their menus for the day – either what they ate or are planning to eat, including their snacks. I’ve been going through their lists to get some idea for what I’d like for my own snacks. It’s easy to just say “fruit”, but the problem (for me) is that fruit and vegetables are zero points, and I have a lot of points to fill in for the day. I love fruit, but it can’t be my sole snack.

I noticed a lot of common foods in their menus, either their snacks or meals. Here are some snack ideas that I’ve started to incorporate into my day:

I saw a product recommended on one thread that was new to me – PB2. It’s powdered peanut butter that you can either use as a powder (some people dip their fruits in the powder, some use it for baking, making ice cream, etc), or reconstitute it into peanut butter using water. 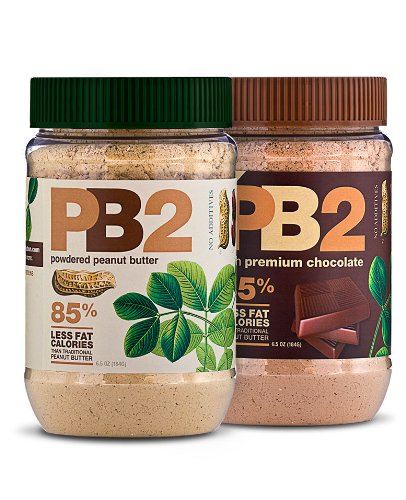 The poster was raving about the chocolate version. I decided to pick some up on Amazon to try out. Here’s the nutritional info for PB2 and PB2 Chocolate:

These numbers are significantly lower than those of peanut butter – so I hope it will be a great replacement for peanut butter in my snacks and baked goods. Looking forward to trying it – it arrives on Friday!

What are some of your favorite low cal snacks?